Getting the Whole Story

In April 1989, a horrific crime took place in New York City that rocked its citizens to the core. A young, female investment banker was brutally raped and beaten while jogging through Central Park at night. The public outcry was loud and frantic, as was the demand for quick and resounding justice. Hours after the jogger was discovered unconscious and clinging to life, over a dozen young men were rounded up by the NYPD, most of whom had been part of a pack of teenaged boys “wilding” that evening – i.e., rampaging through Central Park intentionally terrorizing anyone unfortunate enough to cross their path.

I was living in New York City during this time, fresh out of college, cutting my teeth in the advertising industry and dipping my toes into independent adulthood. I distinctly remember the shock and horror in reading about the Central Park Jogger case, made all the more real for me because I lived in a somewhat dodgy neighbourhood very near Central Park (on Amsterdam and 106th) and frequently used it as a gym, playground, and backyard. It was, after all, one of the few things in New York City that’s free.

Within days, five young men of colour, ages 14 to 16, were identified as the culprits, and forever branded the Central Park Five. When the media reported that the boys had all confessed to the crime, you could feel the city, as a whole, exhale with relief. In our collective minds, the story had been resolved, and so desperate were we for that resolution, that we immediately embraced it in its entirety. We dug no further. The media didn’t really dig much further. And a year later, these five young men were tried and sent to prison, where many of us, I for one, felt they belonged. Case closed…story complete. Or was it?

I recently watched “When They See Us”: a four-part Netflix production that chronicles the Central Park Jogger crime and, more specifically, lays out the incredible injustice done to those five boys charged with it and, blessedly, how there convictions were later over-turned. Watching this superb miniseries made me realize how incomplete and haphazardly-pieced-together the story was that I and millions of other New York residents had constructed in our heads and told ourselves. When these young men confessed, we were satisfied, as was the media. And the trial that took place a year later was barely a blip on our radar screens because, in our own minds, we had taken the facts (reckless teenaged boys, wilding, arrests, confessions, etc.) and pieced them together in a nice and tidy narrative that made us feel safer and, dare I say, just a tad more self-righteous.

Stories are the way we naturally distill and synthesize information. If given a series of disparate and disconnected facts, our brains will typically and instinctively string them together with a story. Doing so helps us make sense of those facts and pull meaning out of them. It also brings us closure, and the comfort, confidence and conviction that comes with it. “Stories can be a way for humans to feel that we have control over the world,” said Cody Delistraty in an article from the Atlantic titled, “The Psychological Comforts of Storytelling.” He continues, “They allow people to see patterns where there is chaos. [We] see narratives where there are none because it can afford meaning to our lives: a form of existential problem-solving.” 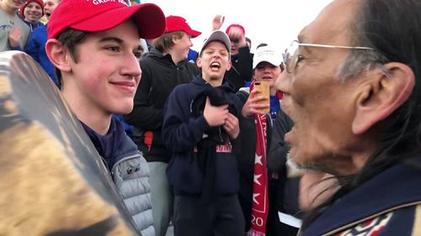 Watching this Netflix miniseries made me realize how much I wanted to, needed to feel in control of that scary NYC world and this isolated incident that took place within it. Accordingly, when the narrative we’d crafted from the information available told us this awful story of the Central Park jogger was complete, I listened to it and bought into it. Thirty years later, I did the same thing when I first saw an image of that Covington High School boy facing off with the Native American elder at the Lincoln Memorial in Washington D.C. Without having all the facts, I (and millions of others) filled in the blanks on my own to complete the narrative that was forming and that, if I’m being completely honest, I probably wanted to hear. In my rush to judgment, I didn’t wait to get the whole story (a whole story which eventually exonerated that young man).

In this hyper-connected world where all the news taking place within it is immediately available to us, we must be more vigilant than ever in collecting the full facts, searching out different perspectives, and letting the whole story emerge before hastily connecting the dots and completing that story on our own. This is something I try hard to do, but admittedly am not always great at doing so. It is especially important in a time when social media algorithms wrap us in an ever-thickening ideological cocoon, and when nefarious groups and rogue nations are weaponizing stories to spread untruths, create unrest, and pit populations against each other.

It might be against our own nature to step back and patiently wait for the whole story to emerge (or deliberately seek it out) versus mentally finishing that story ourselves. But we owe it to ourselves, to others, to society, and to the timeless power of storytelling to get the whole story and be satisfied with nothing less.