I am not one to dwell on the past, but there are certainly times where I relive it. I look back on many moments in my life or career with fondness, nostalgia and, occasionally, some small degree of pride. But there are other moments that will unexpectedly wash over me, stop me dead in my tracks, and make me shudder with horror and shame. It is human nature to want to forget those moments or convince yourself “it wasn’t so bad”. We should, instead, embrace them, learn from them, and turn them into leadership stories to not only keep ourselves on the right path, but also mentor, guide and help others to do the same.

I remember one such “moment I’d rather forget” moment when I was 30 and working for Saatchi & Saatchi in New York City. At that time, I was volunteering for the Advertising Education Foundation (AEF): a non-profit organization funded by agencies to educate the general public about advertising through talks given by people working in the industry.

This was my first foray into public speaking, and they tested me out by having me give a few talks in New York. It was nothing too formal and typically to very small crowds, but it was still thrilling to talk about my work and enlighten others about the art and science behind it.

Then one day my AEF contact called me and asked, “How would you like to go to Montana?” I’d never been to Big Sky Country and so jumped at the chance. The AEF connected me with a woman at the University of Montana in Missoula, who was organizing an evening around my talk about the evolving representation of women in advertising. She and I communicated regularly as she printed up posters and promoted the event; and as we got closer to it, she updated me regularly on how many people were registering: 100, then 125, then 160 and climbing.

I was getting a little freaked out. The largest crowd I’d ever spoken to was, maybe, 30 people. So when she emailed me the day before I was leaving and the subject line read, “247 registered attendees!!!”, I kind of threw up in my mouth a little.

But still, I pulled myself together and made my way to the airport that Saturday morning to begin my trip to speak in Missoula on Sunday evening. I had to fly first to Cincinnati to connect; and the trip was going smoothly, until I got there and found out my connecting flight to Missoula was cancelled and there were no other direct flights that day. I took this as a sign from God that I was not meant to speak to a crowd this large. So, instead of trying to figure out an alternate way to get to Missoula, I turned around and flew back to New York.

Upon arriving home, I emailed my contact at the University of Montana to let her know that, unfortunately, I wasn’t going to be able to make it because of a cancelled flight and there being no other way to get to Missoula in time. I said how sorry I was but also claimed that this was “clearly out of my hands.”

The next morning, I was greeted with an email from my contact that was, shall we say, less than subtle in voicing her disappointment. She listed out three alternate routes I could’ve taken from Cincinnati to Missoula that Saturday afternoon and four others on Sunday morning: all of which she had checked to verify availability. She reminded me how many people were planning to show up, and told me about the refreshments she had bought for them. She remarked how embarrassing it was for her, personally and professionally, to have to cancel an event that she had worked so hard to promote. And in closing, she questioned my character, suggesting that I, perhaps, had none. I am fairly certain she signed off with, “Shame on you”.

Naturally, I got immediately defensive. Rather than slip into a state of contrition like a responsible adult, I doubled-down on my claim that I was unable to find a way to get to Missoula in time and retreated further into the house of cards I’d built upon a morally-shaky foundation. She was having none of it and repudiated my story with the verbal dexterity of Clarence Darrow. Over the course of that Sunday I volleyed back and forth with her on email, thinking that at some point she would let me off the hook, but she never did.

That Monday morning, I walked into the office of my boss, Marie, who was surprised to see me since I wasn’t supposed to be back until Tuesday. I told her my story of what happened and made sure to include mention of the verbal assault waged against me, certain I could fire some maternal reflex in Marie. “I mean, can you believe this woman?!”, I exclaimed in finishing my tale, only to have Marie turn quietly back to her computer and say, “Sounds like you f*cked up Bill. I suggest you own that.”

Clearly, the whole world was out to get me.

I walked defiantly out of Marie’s office and into my own, seething with self-righteousness. Then slowly, over the next hour, my indignation gave way to the recognition that Marie was right (as she so often was); and the shame and regret that had always been bubbling below the surface poured forth. I sat at my computer and wrote my contact in Montana, openly acknowledging that I had messed up and finally, genuinely apologizing for letting her down. I admitted that I was nervous about speaking in front of that many people, but also offered that that was no excuse for not showing up. I was contrite and humble, hoping beyond hope that she might ease my shame by writing back and forgiving me. She did not.

Later that day, I shuffled into Marie’s office and told her what I’d done, as well as how awful I felt about it. She listened attentively and, when I’d finished, she looked me in the eye and said, “Bill, you can’t change what happened. But you can learn from it. Do right by that woman and make sure you always carry this lesson forward.”

Moving forward and unpacking the lesson

And that’s what I’ve done. I was never able to gain closure with my contact in Montana, but I’ve also never forgotten her. And I try to pay homage to her (and my former boss and dear friend Marie) by always fulfilling my commitments regardless of how taxing the circumstances surrounding them may get. I don’t have any good feelings about that whole Montana story, but I do take a valuable lesson from it. And I readily share both when I see someone slipping into or in the midst of a similar mistake.

While we certainly learn a lot about ourselves when we succeed, I believe we learn as much, if not more, when we fail. And when we’re able to share those stories with others, it not only makes us more human and relatable, but the wisdom and guidance connected to those stories can be that much more profound. 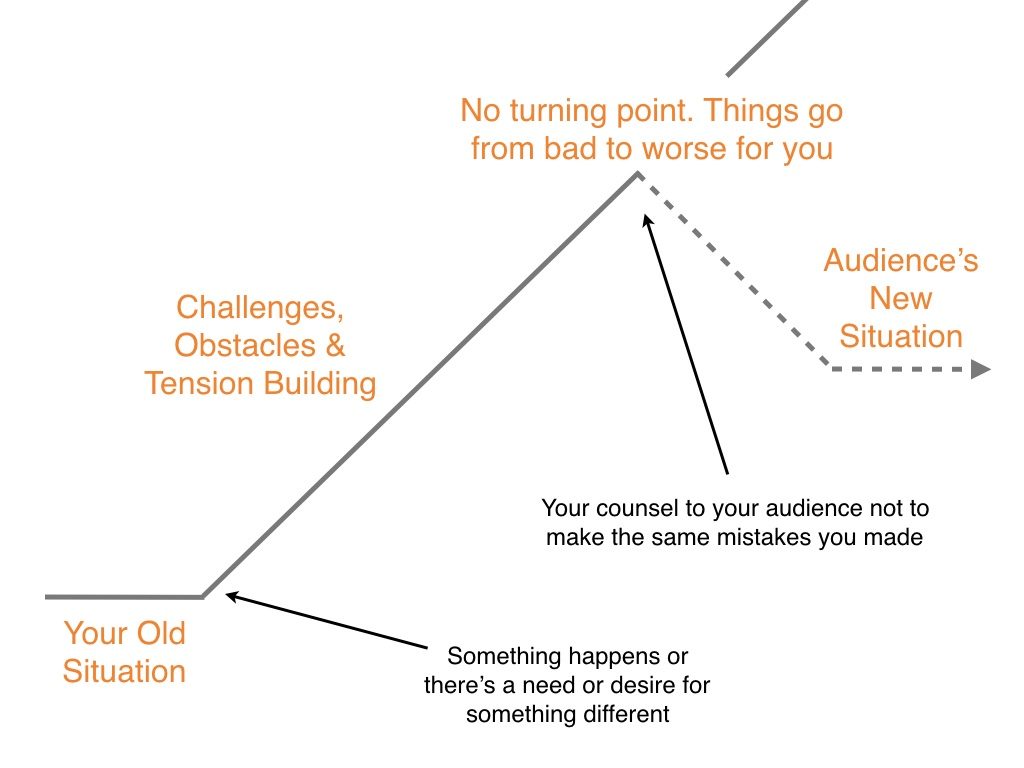 As I’ve talked about in past blog posts, classic story plot structure typically involves a person getting into trouble and then getting out of it again, learning something valuable from that experience. There is tension built up during that trouble, but also the resolution to that tension in the form of a turning point. But what if there is no resolution or turning point? For instance, in the story above, I was never able to correct my mistake nor did I ever resolve things with that woman in Montana.

If you have a situation like this — where things go from bad to worse instead of turning around — there is still a turning point in your telling of that story. The turning point becomes your resolve after that unforgettable, unresolved situation to never make that same mistake again, coupled with your counsel to others to avoid the pitfall you tumbled into and what they should consider or change, right now, to ensure they do.

The great industrialist, Henry Ford, once said, “Failure is simply the opportunity to begin again, this time more intelligently.” So, don’t shy away from your failures. Instead, lean into them, learn from them, and be willing to share stories of them with others: direct reports, co-workers, mentees, partners, family or friends. Not only will you move forward more intelligently, but so will they.