Your Business Storytelling Doesn’t Always Have to Be about You

Often, during one of our business storytelling training workshops, someone will raise a concern around telling stories about themselves and their own experiences. “I don’t want it to feel like it’s all about me,” they will confide. “Like I’m bragging or congratulating myself.”

In response, I will always say that the very fact they have that concern tells me they won’t let that happen — i.e., that it’s typically people with little to no self-awareness who end up making their storytelling all about them, using their stories to pat themselves on the back and/or try to manipulate their audience into doing the same. We’ve all run into people like this before. “Enough about me. What do you think about me?”

That said, there is no reason why the stories you share in a workplace situation have to be about you. You can just as easily, effectively and convincingly tell a story about someone or something else: a story that you heard about a customer, colleague, or client. Or you could share a relevant, analogous story lifted from history, sport, the news, literature, cinema, social media, folklore, etc. 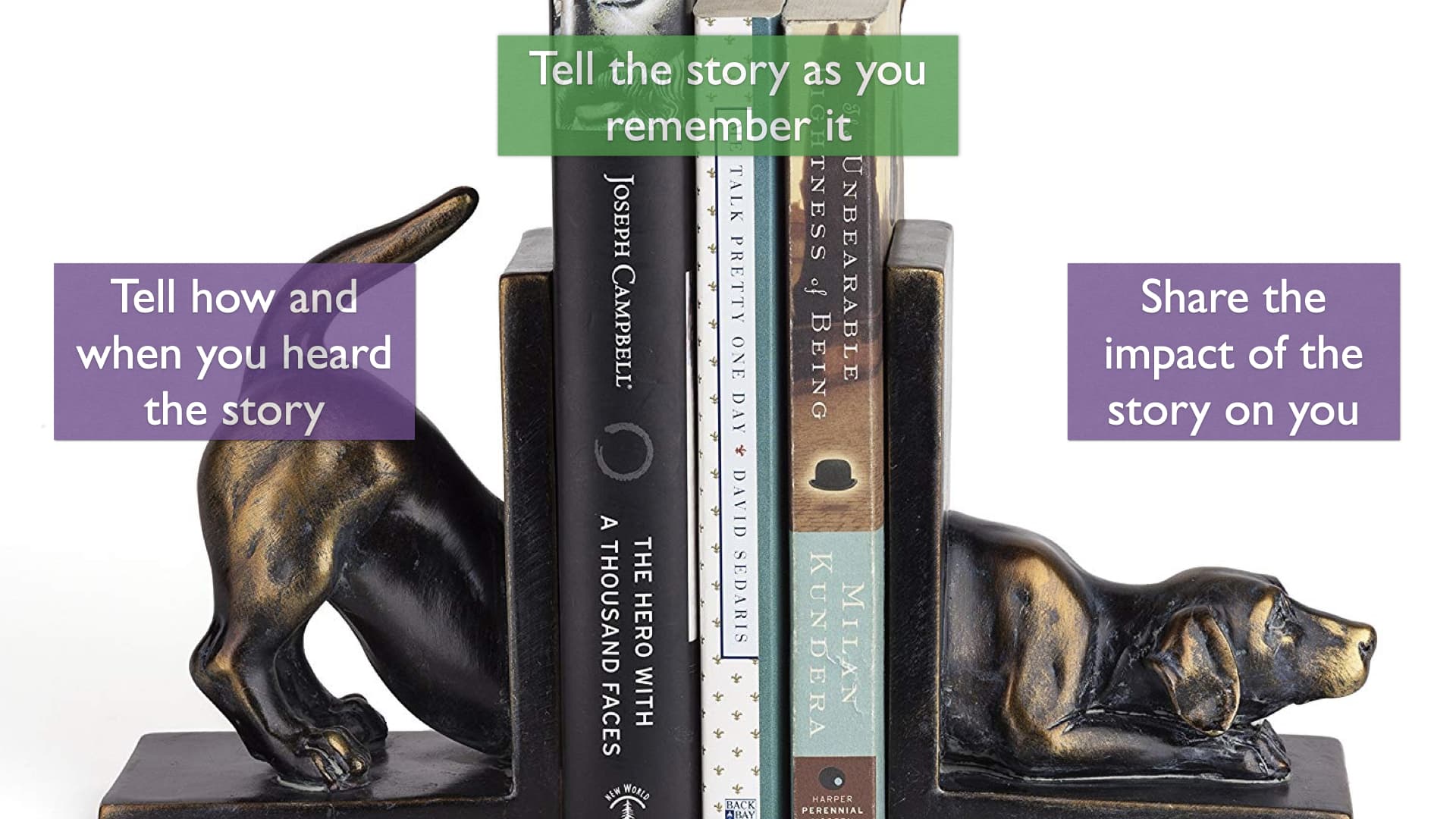 However, when you’re telling a story that isn’t about you, you must still insert yourself into your storytelling. More specifically, think about “bookending” yourself around the story. Let me explain.

In our business storytelling training programs, we teach the typical plot structure that most stories follow, where the main character in the story heads off on a journey or down a path, experiences challenges or problems along the way, overcomes them, and then learns something valuable as a result of that experience. We also look at different versions of that plot structure where, for instance, there is no turning point in the story or resolution to the tensions (e.g., a mistake or blunder that was made and never corrected), but the protagonist still gleans insight and wisdom from the experience.

1) The Storyteller Introduces the Story and Their Connection to It

The storyteller must first start with their own connection to the story, telling the audience why they’re thinking of the story they’re about to share, setting some premise and context for it and establishing some relevance to the situation the audience currently faces. For example:

“When I look at the challenges we’re facing with this software initiative — and how unexpected and unsettling some of these challenges are despite our careful planning — it reminds me of one of my favourite movies: Apollo 13. Have you seen that film? Apollo 13 stars Tom Hanks and Ed Harris, and is based on the true story of one of NASA’s third lunar mission…”

2) The Storyteller Shares the Story

Then the storyteller tells the story to their audience but does so through the lens of their own memory of that story and their personal reflection on it. The storyteller would distil the story for the sake of focus and brevity, but they are still telling the story, not reporting the story.

In this case, using the example above, the storyteller would summarize the plot of the Apollo 13 movie, but would focus on the pivotal “Houston, we have a problem” moment where a major, unexpected predicament with that lunar mission occurred. The storyteller would continue by talking about how the crew and NASA team overcame the monumental problems they faced, ensuring the plot of the story is setting up the lesson or moral they want their audience to take away from it.

In sharing that plot, they would also want to make sure that their audience can relate to the drama unfolding, even though, it’s very safe to assume, none of them has been on a lunar mission — i.e., “Yeh, that’s kind of how I think and feel about this software initiative blowing up right now.”

Then, importantly, the storyteller brings it back to themselves by conveying the impact the story had on them and why they’re now reflecting back on it. In this regard, the storyteller makes clear what lesson, idea or message they pull from the story they just shared, as well as what they want their audience to take away from it. For example:

“I remember when I watched this movie for the first time. And even though I knew they got home safely — because I knew the true story the movie was based on — I was still tense with how overwhelming their challenges were. And I was equally impressed and inspired by how they went about tackling challenges and working through them. I’ve been thinking of this story, this movie, for the past couple of days, because it made me realize that things often don’t go as planned or envisioned. Something will almost always go wrong, especially with complex projects like ours.

But Apollo 13, and the true story that inspired it, reminds me that when something unforeseen occurs when a project gets knocked unexpectedly off track, it’s important to stay calm and assess, know deep down in our core that a solution exists, and then work methodically and confidently as a team to solve it. And that’s what we’re going to start doing, right here, right now.”

Understanding that the stories you tell in workplace situations don’t always have to be about you relieves some pressure while opening up a rich treasure trove of stories for your business storytelling library. The fact is, there is a big beautiful river of stories flowing past us every single day. Not only stories we hear from customers, clients, and co-workers, but also stories we can source from cinema, social media, the news, sport, literature, history, folklore, etc.

Cast a net into that river and capture the stories you need or the stories that speak to you. And make sure when you’re sharing one of those stories with others, you wrap yourself around it, conveying how it affects you, and how you want it to affect your audience.